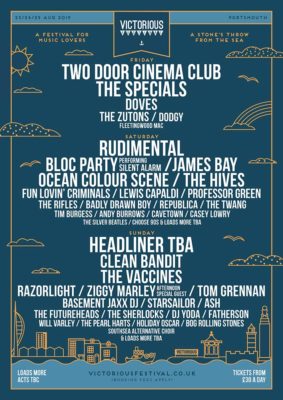 Wow the line up for the 2019 Victorious festival just keep getting better and better. They have just announced the 2nd wave of artists to play and all I can say is wohoo! Love it!
This Portsmouth based festival so is well loved that it is nominated for awards year in and year out. Last year it was nominated and in the finals for Best Family Festival, Best Metropolitan Festival and Commitment to being accessible.

These are great awards to be nominated for and it shows that they really do care and are making an effort to make it the best that it can be. However hard a job it is, I am sure we can all agree what a fab job they are doing. It is an ace festival suitable for everyone!

So the 2nd wave of artists eh – who are they I hear you ask, well, listen up….

Boy have they announced some crackers today. Here goes;

The headliners for Friday are the brilliant Two Door Cinema Club who will be c o headlining with the The Specials.  These are two bands that are certain to end the first night of the festival on an absolute high.
Also just announced for the Friday are Doves, Indie icons The Zutons and our very own rockers, Dodgy.

The opening day of the Victorious Festival 2019 is going to be a good one folks! These are only a few of the bands that have been announced so far so watch this space.

Headlining on Saturday the 24th August is the amazingly funky Rudimental. These guys know how to push the boundaries when it comes to conventional music styles mixing in a little bit of everything into their unique sound. With 2 #1 albums under their belts they are must see for everyone who wants to have a great night!
Also, confirmed to play their debut album in full, the platinum selling Bloc Party will be putting on a show for all to see. Playing just before Rudimental, what a great set it shall be.

So far, Saturday is shaping up to be my favourite day with some of my fav bands. Ocean Colour Scene and Fun Lovin’ Criminals are two bands that I could watch live again and again. Oh wait I have and will continue to do so.

Ziggy Marley has been announced for the Sunday. The 8 time Grammy winner is one to watch. The actual headlining act is still yet to be announced but I can only imagine that it will be a corker if the rest of the festival has anything to go by.

So, time you get your tickets, your festival clothing and get ready to have an amazing weekend.  The Victorious Festival 2019 won’t disappoint.
Tickets are available now and you can get yous by clicking here. You will be taken direct to the Victorious website.