Ah yes, one of the festivals that almost everyone has been looking forward. Spanning over 3 days with an eclectic mix of artists across all stages, there is something for everyone. Whatever your music tastes, there will be a band, or 7, that there you will want to see! 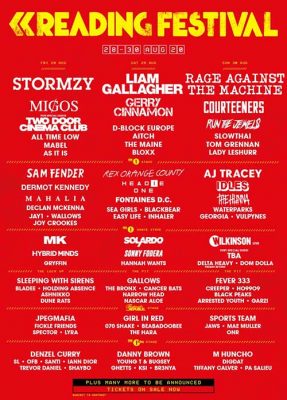 Sadly, as a huge rock music fan, this festival which used to be known as Reading Rock is no more as we know it. Saying that however, it is a festival now better suited for all music tastes due to the fact that it now covers a vast range of genres. The lineup for this year speaks for itself and is set to be a great one.

So, you want to see the lineup eh? Oh alright then! Here are some of the headliners for you;

On the main stage headlining the Friday night you have Stomzy. Stomzy is a British rapper, singer and songwriter who has been lighting up the underground  scene since 2014. His genres covers rap, hip hop and n element of gospel. I all honesty his music is not my cup of tea however, I can appreciate a good artist when I hear one!
Before Stormzy are a host of brilliant bands from All Time Low to Two Door Cinema Club.

Other than the main stage there are of course plenty of other stages for you to take a look at.
If Stormzy is not your bag then you can catch the brilliant Sam Fender on the radio 1 stage.

There is such a great lineup leading up to epic headliner Liam Gallagher. The brilliant singer and songwriter has plans to sing his own music as well as throwing in some old Oasis favourites. A must see in my opinion, why would you want to miss it?!
The lead up to Liam is also just as good. One that I am looking forward to seeing is Gerry Cinnamon. Singing brutal lyrics in his dulcet Scottish tones, his music is so easy to listen to and is truly enjoyable.

The other stages also offer up some brilliant artists including Gallows, Red Orange County, Blackbear and Girl in Red. Some of these guys I had not heard of before the lineup was announced and so naturally I had to investigate – I was glad that I did. Google and YouTube are fabulous for listening to new bands.

The best day in my opinion as it screams of nostalgia. Rage Against are a sure fire band to see. Full of energy they sure know how to put on a show! Having seen them before I would happily see them again and again. They formed in 1991 and have released 4 popular albums with their last in 2000. Looks as though they are making a well received come back. Go and check then out!
Before Rage you can see Courteneers & Run The Jewels amongst many others.

Off of the main stage there are some more crackers for you. Idles, Delta Heavy, AJ Tracey and Dom Dolla are just to name a few with more still to be announced. As already mentioned, Reading & Leeds Festival 2020 has plenty of choice to tingle everyone taste buds..

Reading and Leeds festival 2020 is a wonderful place to showcase your summer festival clothing. The festival runs on the August Bank Holiday weekend which means that it is the height of summer. Being summer and all, it should (I say should) be lovely and warm meaning you can dress accordingly. You will some some nice and cooling clothes during the day such as some lightweight shorts or trousers. During the evening when the sun sets, it can get a little chilly and so we would highly recommend a nice poncho or a fleece lined jacket.
So my festival friends, it is time to showcase your favourite festival clothing and have a wonderful season.