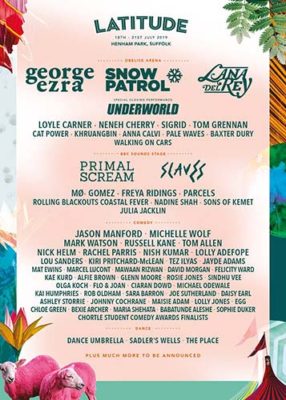 Hot off the press and on your screens, the line up for the 2019 Latitude Festival has been announced. Let me say, you guys are going to love it! If you love the pop culture when this is the 2019 festival for you. The headliners are amazing and are a rival to many of the other festivals out there.

Held at Henham Park in Suffolk, not only will you be surrounded by beautiful countryside but also some amazing bands and entertainment. Here is some of what Latitude festival has in store for you. Let’s hope that as the festival plays in July that the weather will be good to you. I would pack some wellies just in case and some warm festival clothing.

George Ezra – taking the world by storm, man does this guy have a voice on him. A very talented singer and songwriter who is in high demand. So much so that this is not his first festival. He is also headlining the Isle of Wight Festival too. If you were worried that you couldn’t get IOW tickets and would miss him then Latitude is where it’s at next!

Snow Patrol – these very talented dudes hail from Northern Ireland. They have been writing music and touring since 2004 and are currently in the process of their 2019 Wilderness tour. The tour is named after their new album which holds the same name.  With 7 studio albums under their belt they have a huge fan base, understandably so!

Lana Del Ray – what a voice. First appearing on the radar in 2010 with her self titled album. 2012 was they year when she really came into her own with her 2nd studio album “Born to Die”. This album got the attention of the world with is glamorous and melancholy sound.  She has since released 3 other albums with another in the works. I am sure that Lana puts on one hell of a show!

Although the line up has been announced, we do not yet know who is playing when and on what day so here are some top picks for you;

Primal Scream – yes please thank you very much.  Slaves – news is that the the lead vocalist Jonny Craig has just been kicked out of the band so let’s see who they replace him with.
Gomez – now if you have never seen these guys then you must. I have seen them so many times and do so at every opportunity that I get. I never get tired of them. Their sound is fun and unique. They are fabulous. Personal opinion, if you only got to see one band at this festival, sod every one else, get your asses to Gomez!
Freya Ridings, Parcels, Soms of Kemet and Rolling Blackouts Costal Fever are also worth a look in if you get a chance.

The early bid tickets have already sold out however, the remaining tickets will be on sale on Saturday the 26th Jan 2019. Click here to go to the official website to get your tickets