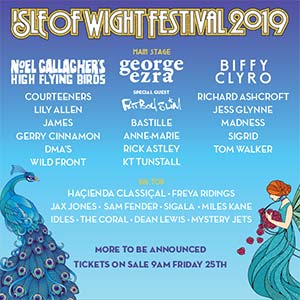 The Isle of Wight Festival is a fantastic festival that is amazingly fun and is suitable for all of the family, young and old.
We have just heard this morning from the organisers that it has just been announced who the first acts are. Are you excited?? We sure are! Looking at the lineup so far, this year’s festival is going to be AMAZING!!!

Now usually, we would just tell you know the headliners are but, this year the whole festival is worth seeing. If you have the ability to split yourself into several people then do it so you can see all of the amazing bands. If not, and I doubt that anyone actually can, just pick your fav’s and you will be in for a real treat.

Headliner – Noel Gallagher’s High Flying Birds.
Awesome! Since starting up for himself and going solo in 2011, there have been 3 studio albums released and every single one has come in No.01 in the UK. This just goes to show the kind of artist that he is and the pure talent. Noel really is one of Britain’s greatest songwriters. His voice is ace too!

Other Acts on the Main Stage
Here are some of the other acts appearing on the main stage: Courteeners, James (have seen these guys loads and am never disappointed), Lily Allen and Gerry Cinnamon. There are others to be announced still so watch this space.

Headliner – George Ezra.
A very talented young gentleman who will be making his very first festival debut as a headlining act. He has won numerous awards for his singing and songwriting and deservedly so. His voice is one of a kind and is just spectacular. You would be daft not to see him.

Other Acts on the Main Stage
These are some of the other acts that you can see on the main stage: Special guest FatBoy Slim will be making his debut at the Isle of Wight Festival which is set to be a mix of all styles of music in classic Fat Boy Slim style. You will also be able to see Bastille, KT Tunstall, and Anne-Marie.

Headliner – hold on to your hats folks as here you are in for a real treat. ready…. Biffy Clyro
Back by popular demand after last playing the festival in 2014. This amazing band hailing from Scotland are one of the most talented bands around. They have been making and releasing music for the last 16 year and the fact that they are still playing as headliners is a true testament to their talents. If you see no-one else this weekend, just make sure that you don’t miss them! You will regret it if you do. Trust me!

Other Acts on the Main Stage
What a great lineup for you. Here are some of the band that you will see. Richard Ashcroft – you will want to watch this man trust. We saw him perform at IOW 2016 and he was epic.
Jess Glyne is another artist not to miss along with Madness and Tom Walker.

So, all in all guys, as a reult of this year’s line up, you are in for an unforgettable weekend!
Tickets go on sale on Friday the 25th Jan 2019. Click here to be taken to the official website.