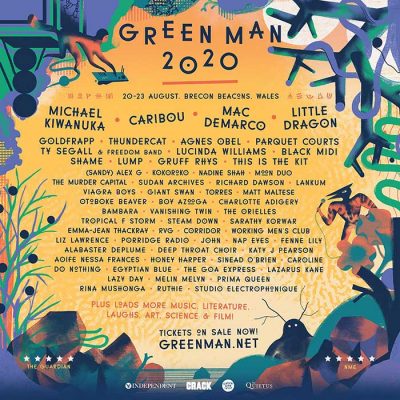 The line up for the 2020 Green Man Festival has landed and such a treat do they have for us this year. If you have never been before then the Green Man is such a wonderful festival to attend. Spanning over 4 days, there is a wonderful mix of live music spread over several stages not to mention that they also have additional events across the festival showcasing, cinema, comedy, theatre, poetry and oh so much more.

Green Man is a festival that you can happily take the whole family, old and young. The organisers have everyone covered and have entertainment for all. Where possible, they are predominantly a green festival – the greenest across the UK in fact! Advocates for the environment, they ask that you think about how you can make your festival experience as sustainable green as you can.  Something that we should all think about – not just at festies but across our day to day life.

It hasn’t yet been released who is playing on what day but, that matters not as there are some cracking artists for you to see. Here are some of the Headliners;

Michael Kiwanuka – a British singer and song-writer he has been impressing the people since 2012 when he released his debut album Home Again. His debut album went gold and his second album released in 2016 went straight into #1. The music is a mix of r&b, soul and indie. His new album has been described as raw soul and I cannot wait to hear it.

Caribou – a Canadian musician who’s genre is dance electronica. A man who has a PhD in Mathematics, sure knows his music and is worth catching if you can.

Mac DeMarco – another Canadian who knows his stuff. This dude has been on the scene since 2012 and his music is described as Indie/psychedelic rock. I personally have’t listened to any of his music however, I will be giving him a look up as his reviews are excellent.

Little Dragon – Swedish Electronica which you are sure to enjoy (if you like electronica of course). With 5 fabulous albums to listen to, get familiar before you go so that you enjoy to the max.

These are just a few o the amazing bands that you can catch. Many of them you may not have heard before however once you have, you will become firm fans of many I am sure.

Apart from the tunes, there is plenty to keep you amused. Need a break from music for a wee while then why not catch a comedy show or even a movie. Taking kids with you then you should check out the amusements for kids in the little folk area. They must be accompanied by an adult at all times but you can get involved too or, sit and read a book in the sun while your little ones have some fun. There are 10 different areas for you to explore including nature and science areas.

Set at the foot of Breacon Beacons in Wales, there is plenty of natural beauty around too so take yourself for a stroll and take in some fresh sights and sounds.

So, festie lovers, time to dust off your favourite festival clothing and get yourself a ticket. Tickets are available now – click here for more info.