With Download festival 2019 now finished we thought we would share our one day experience with you. I haven’t ventured to Castle Donington since Oz Fest in 1998 (showing my age a bit) so its been a wee while. But with Tool hitting the main stage on the Sunday it just had to be done, mud or not. Tool may not be everyone’s cuppa tea but, whether you like them or you don’t, they sure do know how to make epic music.


The story before we left

Like most people heading to Donington over the weekend The Festival Clothing Company was glued to the news reports. Lets just say they were a bit damming towards Festival Republic when it came to the organisation of the festival.

Mud was the word being thrown around as mud was what was being thrown around. There was a lot of the stuff and it wasn’t being handled well at all. With many people complaining about the fact that this is a feature every year and so should have been on the radar. Instead scenes of people wading through mud as they left the site spread across news outlets. People were not impressed and the music hadn’t even started yet. Good start eh?!

Yes we are in the UK and yes it rains but, with a little management this situation could have been handled a little better. With the organisers trying to get straw down at the last minute,  it was too little too late.  Folk who were walking through the village were complaining that the straw just wasn’t helping. Well we had to find out for ourselves what was in order so off we went to the festival. We had our funky festy clothing, wellies and rain poncho in tow.

Getting into the festival

After reading the reports we were quite surprised that most of the car park was in pretty good nick. Don’t get me wrong, there were a few dodgy places that were deep in mud. We also noticed low level cars parked in places that were going to cause issues with them getting out later. Good luck in those deep ruts unless you have a 4×4.

With festival clothing on our backs and wellies on our feet we were off. The walk from the car park to the main entrance really only took about 10-15 minutes. There is a bridge that spans the road from car park to festival site. Wellies were needed but all in all it wasn’t too bad.

We walked past the guys at the honesty bin for drugs and I have to say they didn’t seem to be attracting many people. No honest drug takers wanted to part with their weekend drugs before entering the site. It was a nice and amusing though though.  Be interesting to know how many people handed their drugs in during the festival.

The ‘you can only take an A4 sized bag’ seemed to be a bit of a joke as people were walking through was rucksacks with no issue, lets face it this is a silly rule anyway especially if you are there for a day as you don’t have a tent to store your shit in.

So after coming through the gate we found the mud, in fact it found us. If this was ever a field of grass the grass had long packed its bags and left. The only bit of green I could sense was the slight smell of ganja in the air. Brown is the in colour this festival season and at download it was here to stay. 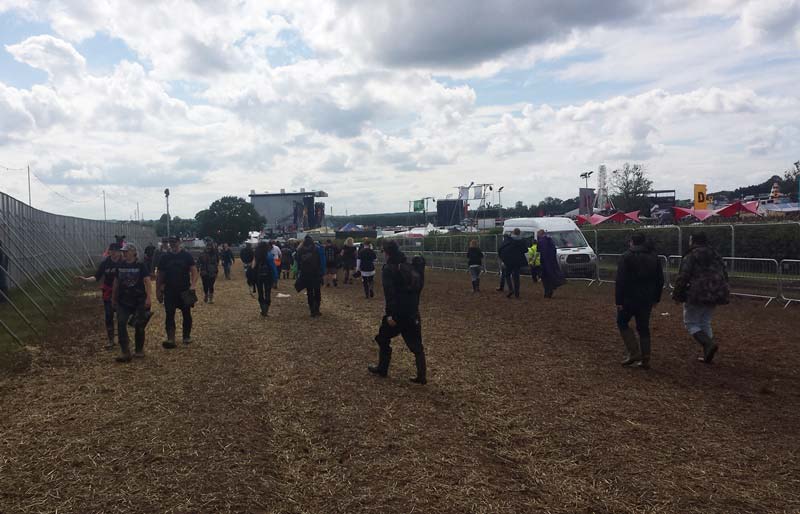 Thankfully by Sunday most of the arena (with a day pass you can only go in the arena) was ok. Not nearly as wet as as the reports were saying. We never found a  single blade of grass but we also never fell arse over tit. I certainly count that as a win. With our shitty camp stools (yes I broke one, but in my defence is was a little broken before I sat on it) we had our own dry place to sit down.

The toilets for me where fine and dandy, they could certainly do with adding a few more. As I didn’t need the old number two I didn’t see the state of the porta loos, just the urinals. I think had I spent the whole weekend at the festival I would probably have a different word to say about the campsite bogs. But,  as I didn’t use them I can’t comment on what they were like. Nici used the porta loos and reported clean toilets with fresh bog roll on tap along with working hand sanitiser. This was a surprise but one she was happy to embrace, she was just a little put out she had waited so long to pee. Having been in many festy loo’s can you blame her? To clarify more toilets needed for sure.

People are a big thing at any festival, they are what make it. The atmosphere seemed happy and most people seemed glad to be there. Lots of people staring at their phones which is the new festival thing but otherwise nothing bad witnessed from us.

As with any festival there was a large variety of food stalls, all over priced but that’s no surprise. I should have gone to the veggie stall as this tends to be the better quality food but £10 for halloumi fries and Falafel roll (or something along those lines) I decided to stick with a £7 burger and £3.50 pomme frites that were in fact just chips. Dress up the name all you like but pomme frites is a thin chip not a thick chip (god I sound old,I’m not honest). Next time I’m just going to but the veggie choice and then hopefully my only complaint will be the lack of meat. I’m sure there were plenty of great stalls and I just ran out of luck with the two I hit. Hay ho welcome to festival food.

Beer was flowing and although in some places there was a bit of a queue I think the longest we waited was 20 minutes. This is a whole lot less than the original reported hour. Although they really need to get this sorted as you don’t expect to waste good band time waiting in line for a beer. 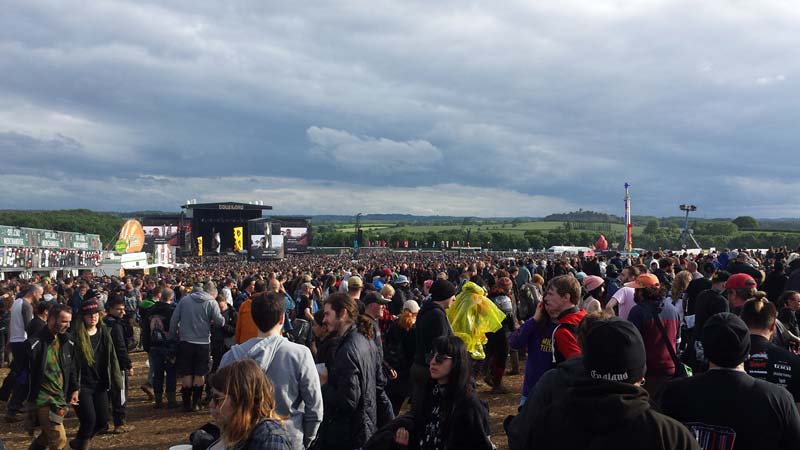 We managed to make it over to the Zippo Encore stage (other stage) to see a couple of bands (Bear Tooth and Anthrax). I’ll be honest I wasn’t venturing down to the mosh pit as that looked hectic and muddy but from where we stood the sound was good and people were having a cracking time. I think if you are standing too far to the right of the stage (as you look at it) then you’re going to have issues with hearing the main stage. I think the people who saw Slayer will back me up on this. 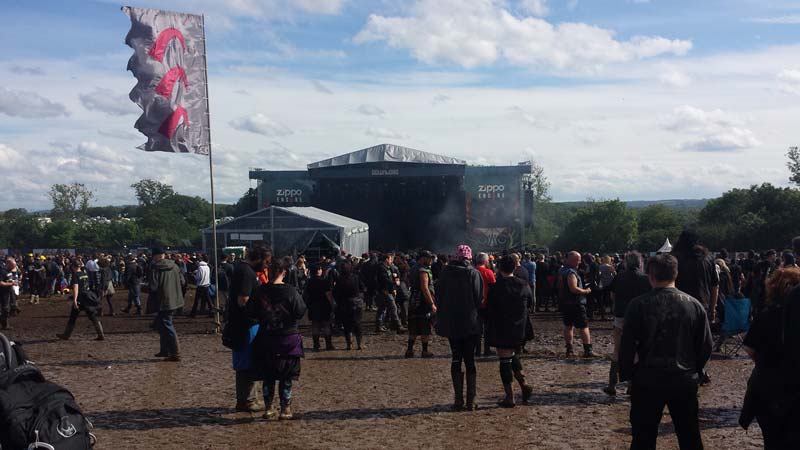 The main stage was the main reason we were at Download. We spent the evening over there watching Smashing Pumpkins followed by the Sunday headliners Tool. The area around the stage had been heavily laid down with straw but the ground was still pretty sticky. At the end of the day I would have still been there even if the heavens had opened. It could have been raining frickin cats and dogs and I would not have moved..  Lets face it, sometimes  estivals get wet so just make sure you make the best of it wherever possible. 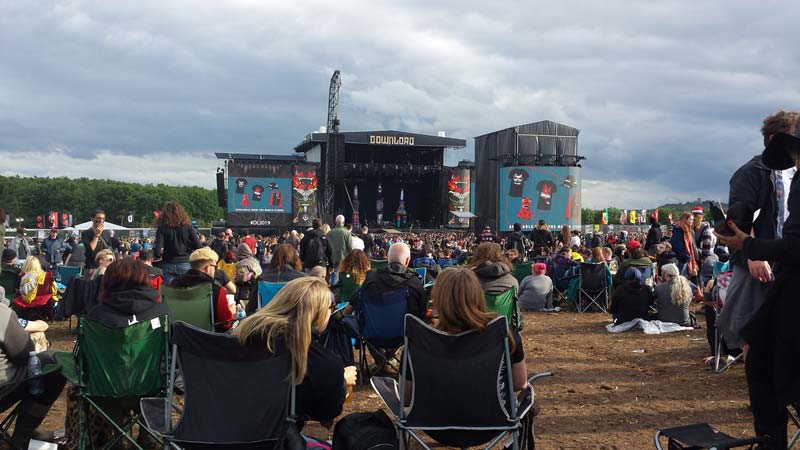 Getting out after the gig

So the bands were amazing, the atmosphere was good, the food was sketchy but the toilets were not that bad (for us at least). The one thing that was bloody awful was trying to leave the car park. We made it back to the car in pretty quick time but the whole place was gridlocked and so we still spent an hour absolutely still, not a bit of movement. After 1.5 hours we made it out which for some of you is probably a pretty good time (I’ve seen people saying they were there for hours). Unless you really push you don’t get anywhere which is never idea. The organisation is kinda crazy, people want to get the hell out of there but it ain’t happening fast.

Would we go back?

If there is a band we really want to see then I don’t see why not. As long as I have my wellies on my feet and my wife at my side I’m sure it will all be fine. If not then it gives me something to moan about later – bloody mud 😉

Please remember that this is just our experience of the festival. We were there for only one day and the driest of the whole weekend so our experience is going to differ from other peoples. If you want to share your story then please get in contact.

We are open as normal and shipping items Monday - Friday. Dismiss